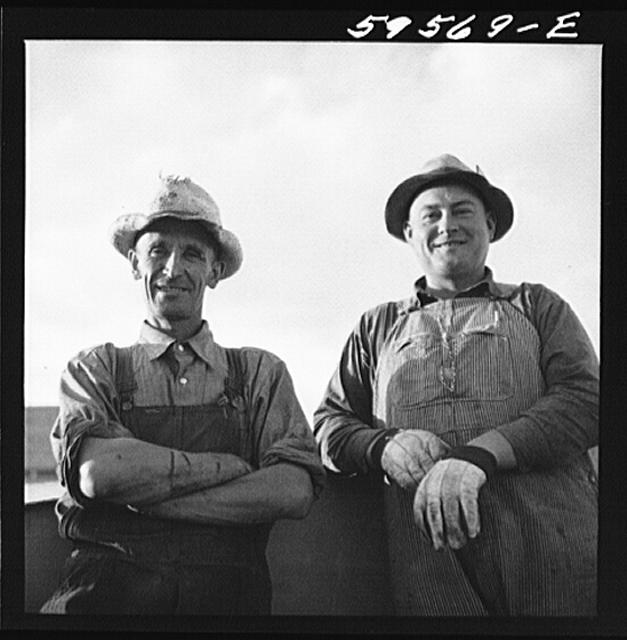 I came across Elmer and Frank a few years back when I was doing some research—looking for photos of Scottsbluff during the WWII era for a book I hope to write. I discovered many useful images on the American Memory website hosted by the Library of Congress, (visit http://memory.loc.gov/ammem/index.html to view an amazing collection of digitized images available online) but there was something about these two men…they spoke to me…so much so that I ended up printing out a copy of their photo and tacking it to the bulletin board next to my desk. They hang out with me every time I sit down at my computer to write. I don’t know anything about Elmer and Frank beyond their names and the fact that they were on the board of something called the Cooperative Association of Scottsbluff Homesteads. The picture was taken in September of 1941 as part of a project for the Farm Security Administration. These two men would have been acquainted with the members of my family who were farmers, great-granddad Henry Otte and his sons, as well as great-granddad Archie Kaasch who was no longer farming at that time, but was working for the Farmers’ Union Co-op. It would be interesting to figure out those possible relationships. What could Elmer and Frank tell me about my own family?

Elmer and Frank are just two of the chorus of voices that have taken up residence in my head. My fictional characters—who already compete to tell me their stories—are none too happy about sharing space with all these ancestors who have joined them now that I’ve taken on this genealogical journey. My fictional characters are easier to deal with. They tell me what food they like, what music they want to listen to…some even have their own playlists on my iPod. They do get a bit restless though when I ignore them for too long. But these ancestors…I haven’t quite figured out what they want to tell me. I suppose the first step really is in the discovery of who they are. I have faith the rest will come in due time.

My friend Joe Paprzycki, a playwright and the Producing Artistic Director of the South Camden Theatre Company is an inspiration to me when it comes to figuring out who’s telling me what. He’s been able to combine all his voices in a unique manner. What first attracted me to Joe—as a friend and as a playwright—is his love of family history. Here is a man who not only uses his family as inspiration for much of his writing, but he was also able to build his new theater on the moldering remains of his grandfather’s former bar. I highly recommend that you take time to visit the theatre company’s website www.southcamdentheatre.org and read about the history behind this undertaking. (And of course, if you live in the vicinity, take in a show!) Joe opened the 2010/2011 season in his newly built theater with his own play entitled Last Rites… a beautiful and heartbreaking story about the men and women who lived through the decline of Camden during the exodus of the shipbuilding companies in the 1960’s.  I had enjoyed an earlier production of Last Rites, but to see it in the same (remade) space, where the actual individuals who inspired the fictional characters sat at Walt’s Café bar some fifty years prior, was a different experience altogether. If you believe in ghosts…well, let’s just say there was a spirit about the place that night.

This past Saturday night my husband, and a friend and I went over to Camden to see Joe’s newest play…one that he’s been working on for over twelve years… Tennessee’s Final Curtain. As it turns out, the subject of the play, the great playwright Tennessee Williams, had a number of voices in his head as well. Tennessee’s family history helped shape his iconic characters…Blanche and Stanley in Streetcar… Big Daddy, Brick and Maggie in Cat on a Hot Tin Roof…to name a few.  Joe in turn, spent a great deal of time haunting the places that Tennessee frequented—the towns and cities, even the hotel rooms—as he channeled the spirit of the earlier playwright.  Earlier that afternoon I had been sitting at my computer—with Elmer and Frank looking on—writing about this notion of “voices in my head” and how grateful I am I don’t live in a time where I would have been locked away for being completely crazy. And there I sat in the darkened theater…and one of Joe’s characters starts talking about “…the voices and being locked away…” I have stopped believing in coincidences…things like this just happen way too much in my life. The characters on stage, through the words Joe had written, were speaking directly to me.

Experiences such as this convince me further that my genealogical journey is leading somewhere…and is obviously more than a search for dead relatives. As I move forward, I am attempting not to feel the need to come up with some pre-determined outcome…but to simply remind myself to just keep moving forward and to stay tuned to all these new voices I am inviting in. And yes, to reassure myself periodically that I’m not going crazy.

Next up… tomorrow I will spend the day at the Philadelphia Convention Center for Ancestry Day sponsored by the Historical Society of Pennsylvania. Even though I’ve spent a good deal of time on Ancestry.com, I hope to pick up some new tricks of the trade. This will be less about tuning into the voices and more about learning how to access and organize the information that’s available to all of us researching our family roots. Imagine…hundreds of people with the voices of their ancestors in their heads…all in the same place at the same time. Hint, I currently have 1157 members on my family tree and expected attendance at tomorrow’s event is at least 400 people. Should be interesting.

One thought on “The Voices in My Head”