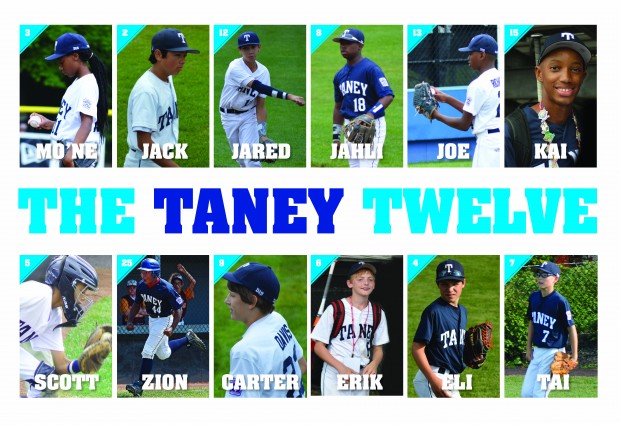 My stomach is already churning in anticipation of tonight’s Little League World Series game featuring Philadelphia’s Taney playing Las Vegas’s Mountain Ridge. Taney’s last game (against Pearland, TX) was a complete nail-biter…and way more stress then I wanted on a Sunday night. I screamed so loud when Tai Shanahan hit that grounder sending Zion Spearman home for the game winning run, that my husband came downstairs to make sure I was okay. I couldn’t help myself. It was a great release after almost two hours of holding my breath.

Of course the Taney phenomenon has taken on epic proportions across the country in no small part due to their star pitcher Mo’Ne Davis. It is not just that she is a gifted athlete—she is also by all accounts a strong, self-assured, intelligent young lady. And now she’s the cover girl of Sports Illustrated, the first Little League Player…ever…and she is NOT wearing a bathing suit. We locals were simultaneously proud and mortified of a potential SI cover jinx. But we’ll think positive…Philly pride all the way baby!

The block that I live on in downtown Philly is dominated by the Palumbo Recreation Center: my home is often bathed in the illumination from the playing fields; we hear the crack of the bat and the roaring crowds; and we fight for parking spaces during practices and games. You would think I would consider this a nuisance, especially since I am a middle-aged woman with no children. But I don’t. I love the energy. There is a playground for small children and a basketball court that is always hopping the moment the doors open. As I write this I hear the earnest young voices of children at play echoing down my block. It is a reassuring sound. All is well.

And I wonder if my own fascination with the Taney Dragons has something to do with my proximity to this busy Rec Center. I am a sports fan to be sure, but I can’t say I actually gave much thought to the Little League World Series before now. But these kids, several of whom have ties to my neighborhood and Palumbo, feel like “my” kids. I don’t just want to root for them as a team, I want to root for each and every one of them as individuals: Tai, Zion, Mo’Ne, Erik, Scott, Kai, Jared, Joe, Eli, Carter, Jack, and Jahli. Jack who got clocked in the face and had us all worried. And Jahli…oh Jahli…the aggressive base runner whose lack of fear is breath-taking. And oh I can feel that grand slam homer just waiting to come out of him…

And I think it is just that, the potential. And the ability to bear witness when you see their hard work and dedication pay off. And it’s all made more special by the fact that this team has been created and supported by a special group of parents. I loved learning that the coaches are all self-taught, that these were parents who just wanted to create opportunity for their children. They have banned together, helped each other through the stresses of daily practice and the expense of the game, saw each other through major illnesses, and family tragedy, and bonded on a level much deeper than any of them could likely have imagined. We have been told that the team goal is less about winning, and more about learning how to be part of a structured team. The respect is quite evident. Coach Lott has been quoted telling the players that there is no need to worry as “somebody will pick you up.” That’s a wonderful gift for these children to learn. How lucky they are to be a part of a community that has that sort of support on and off the playing field.

The Taney Dragons represent the best of how we see ourselves as Philadelphians. They are smart, fearless, poised. But more importantly, they represent the untapped potential of ALL of our city kids. And here is the thing I think about when I watch these wonderful kids playing baseball: These are the lucky ones. These are the ones whose parents are fighting for their opportunities. These are the ones who have been admitted to top-tier Philadelphia schools. These are the ones who have a chance to achieve their dreams. And what I know is that far too many Philadelphia children don’t have these advantages. They don’t have “somebody to pick them up.” Our new school year is set to start despite gargantuan budget cuts. Our children will have fewer resources. Our children will have less opportunity to discover what makes them special. Our children will have less opportunity to discover their own passion.

Last week gun fire rang out right in front of the Palumbo Rec Center, piercing our normal bubble of peace. We all counted ourselves lucky that it was late at night, and while two teenagers passing through on bikes were shot by an unknown assailant, no one was seriously injured. A shooting in this location illustrates just how fragile the balance is between opportunity and misfortune. Anything can happen. And while we celebrate the best of who we are, we need to keep in mind that we could be doing oh so much better for our city kids. They are all dragons. And they all deserve our support.

2 thoughts on “They Are All Dragons… #Believe in Dragons”